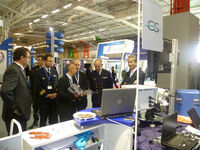 Organised under the patronage of the Ministry of Defence and the General Secretariat for the Sea, the 22nd Euronaval international show took place at the Parc des Expositions in Paris-le-Bourget, from 25 to 29 October 2010. This year, the show had more than 400 exhibitors representing 37 countries.The PACA Sea Cluster was there in force once more, with a 240m² stand with over 22 exhibitors, members of the Cluster of actors in maritime security and ships: Acsa Underwater GPS, Cesigma, Chrisar Software Technologies, CS Systèmes d’Information, Diginext, Extrem Vision, INPP, K Epsilon, Kontron, Mobilis, Moteurs Baudouin, Navitec, Osean, Principia, Seagull Security, SMAC/EPCOTS, Subsea Tech, Tethys, Toulon Provence Méditerranée, Var Accueil Investisseurs/Provence Promotion and Wilco International.  During the week, the cluster organised several events at its stand in order to promote its members and their expertise: the stand was visited by the Minister of Defence Mr Hervé Morin, foreign delegations, the General Secretariat for the Sea, Mr Jean-François Tallec and the Chief of Staff of the Navy, Admiral Pierre-François Forissier, who held a cocktail reception for the members of the PACA and Brittany sea clusters.Congratulations to Subsea Tech, who won the Growth Award at the Euronaval Awards!