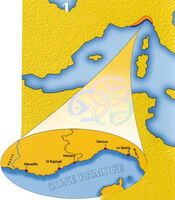 On October 28 and 29, the PACA Marine Cluster participated in Monaco in a symposium on the sustainable management of sediments, which was organized in the framework of the RAMOGE agreement between Italy, Monaco and France. One of the clear outcomes of this symposium was the need to further develop the management of marine sediments, in the twofold context of additional dredging as well as protection of the environment.Each year, the dredging of port sediments actually represents nearly 50 million tons of materials, some of which are contaminated. Considering only the bay of Toulon, the sediments to be dredged amount to 400,000 m3.The PACA Marine Cluster is supporting several pilot projects in its territory. Regarding SEDIMARD, the Toulon Bay Contract, the General Council of the Var Department is the contracting authority for a site for the treatment of dredged spoils; the characterization of the components and the identification of valorisation channels are managed at this site. The SEDIGEST project is aimed at validating under which conditions, as well as the required processing and the precautions to be observed, these sediments could be used as landfill material, especially for quarries restoration?The SEDIDEPOT project expects to provide an initial response in terms of land storage after pre-processing.The SEDIMATERIAU project, under preparation, is aimed at studying the different recovery channels (fill material, cement, etc.) for these marine sediments.