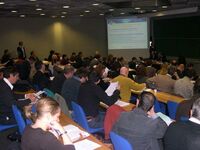 The new Goal-oriented Contract, which the PACA Competitiveness Marine Cluster will sign shortly with the State and Communities, will constitute its road map for the period 2009 – 2011. It is a continuation of the first framework contract for the establishment of Clusters (2005-2008) which was assessed for the first time last year.Technological and market strategies, goals, action programs: these items of the Goal-oriented Contract give the Cluster its future dimension.In order to reinforce and gain greater visibility for its development internationally, the management of the Cluster has elaborated unifying programs based on its two major strategic themes, Security and Safety, as well as Sustainable Sea and Coastal Development.Eight unifying programs have been identified from among the five themes of the Marine Cluster (i.e. 101 accredited projects, 66 funded and 250 actors). As of now, all of those who wish to take part in these very promising programs, are invited to join the Cluster.