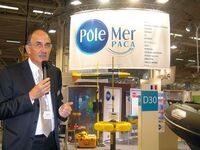 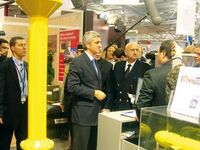 The PACA Marine Cluster welcomed its members and partners during the entire week of the Euronaval trade fait at its magnificent 200 m2-stand.  ACSA, Chrisar Software Technologies, Moteurs Baudouin, Principia, Kontron, Cesigma, CS, Diginext, INPP, Thales Safare, Pegase Instrumentation, ECT Industries: each of the twelve businesses participating benefited from their own special area at their disposal. Likewise, the three PACA economic development agencies, Var Accueil Investisseurs, Provence Promotion and Team Côte d'Azur, as well as the Agglomeration Community of Toulon Provence Méditerranée (TPM) benefited from their own area.In addition to numerous contacts made thanks to the great turnout at this stand, this week was marked by four especially intense moments:The visit of Hervé Morin, the French Minister of Defence, during the official opening of the trade fair on Tuesday 28 October, followed by that of his Secretary of State, Jean-Marie Bockel, on 30 October, demonstrated the commitment of the State with competitiveness clusters.On Wednesday 29 October, the Marine Cluster and Toulon Provence Méditerranée organised a cocktail, in the presence of Philippe Vitel, Var Member of Parliament, with the presentation of leading projects by their project holders: Secmar project by Thales Underwater Systems, MWPS project by CS, Sea Explorer project by Acsa and Condor and Gyroviz projects by Sofresud.The following Thursday 30 October, the Marine Cluster and the economic development agencies coordinated a presentation for setting up opportunities in the Provence Alpes Côte d’Azur Region, as well as the presentation of BMCI and CVAO, two projects carried out by DCNS.Lastly, the PACA and the Brittany Marine Clusters held a joint press conference, in the presence of both their presidents, Bernard Sans and Hervé Moulinier, and their two directors, Patrick Baraona and Patrick Poupon.This trade fair proved to be a fantastic opportunity for holding meetings and exchanges especially with six foreign delegations in attendance (Benin, Chile, Venezuela, Kuwait, Saudi Arabia and Cameroun), a Spanish cluster and about fifteen new businesses.