Focus on innovation and competitiveness

The ambition of the Pôle MerMéditerranée, innovation sea cluster, is to sustainably develop the maritime and coastal economy in the Mediterranean sea and throughout the world by developing innovative projects and supporting development of companies.

In the South Provence-Alpes-Côte d'Azur, Occitania and Corsica regions, the cluster brings together scientific and economic actors around maritime and coastal themes with high security and sustainable stakes.

Certified as a global competitiveness cluster in 2005, the Pôle Mer Méditerranée cluster brings together and supports start-ups, SMBs, large groups, research and training organisations around the six areas of strategic action:

Two levers likely to generate major technological breakthroughs in the coming years have been identified:

Therefore, it has decided to make them two transversal axes for the six strategic actions area, with a specific and concrete animation. 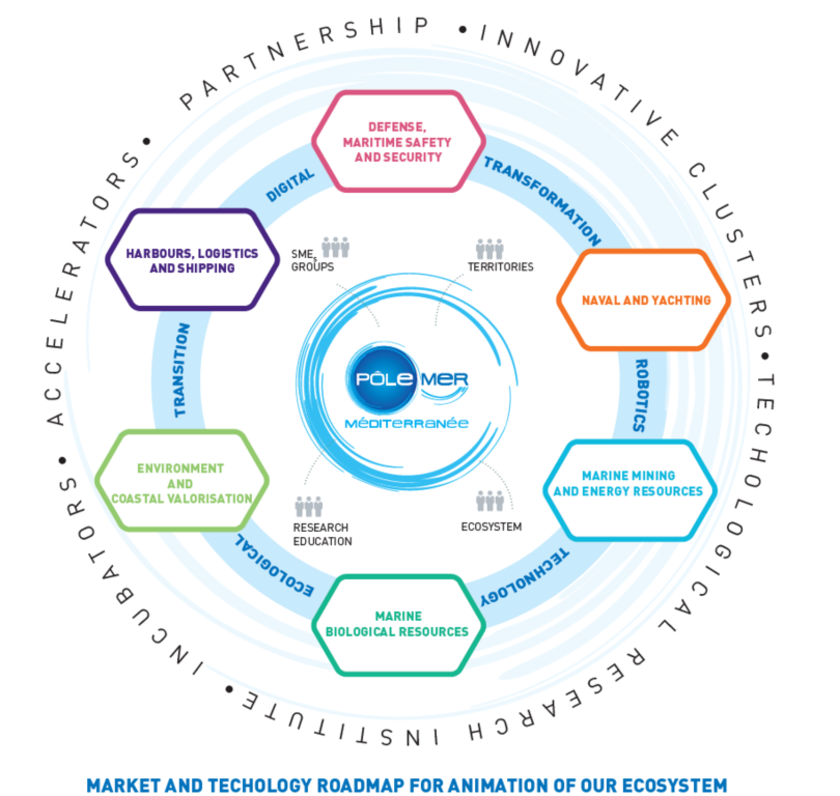 For the period 2018-2022, the Innovation Sea Cluster has declined its ambition to develop the maritime and coastal economy in a sustainable way into 3 strategic orientations:

BEYOND ECONOMIC DEVELOPMENT, TO INNOVATE SUSTAINABLY.

The Mediterranean Sea has always been a source of inspiration for the most ambitious ideas for developing the maritime economy of our territory. It is in this spirit that Toulon Var Technologies (TVT) initiated the "Marine & Submarine Network" in 2000 with the support of Ifremer, the Centre d'Océanologie de Marseille (COM), the Observatoire Océanologique de Villefranche (OOV), the Institut des Sciences de l'Ingénieur de Toulon et du Var (ISITV), the Sud Toulon-Var University (USTV) and regional companies.

PRIDES (Pôle Régional d'Innovation et de Développement Économique Solidaire) accredited by the Provence-Alpes-Côte d'Azur Region in 2007 and 2011, the Pôle Mer intends to meet the challenges of the 21st century to develop maritime innovation projects in the Mediterranean.

Since the General Assembly on 27 June 2013, the PACA Sea Cluster has become the “Pôle Mer Méditerranée” cluster and registered its brand. This name change corresponds to a natural and legitimate evolution of its activities and territory around an ambition that is both Mediterranean and international.

The Pôle Mer Méditerranée cluster is becoming a driving force in the competitiveness of companies. Always looking to the future and the most ambitious innovations to sustainably develop the maritime and coastal economy in the Mediterranean Sea and throughout the world.